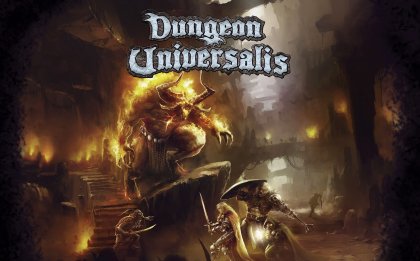 A classic Dungeon Crawler board game for 1 to 6 players (Age 12+). The game includes many game modes, including a lone wolf one. DUN&acute;s system merges its intuitive mechanics, card games and the almost unlimited possibilities and options of a RPG.&#10;DUN includes a huge narrative campaign and several independent quests. It also allows you to design your own quests or simply to use its rulebook, system and cards to replay missions and quests from other Dungeon Crawlers.&#10;&#10;The game adapts to any medieval fantastic background. However, it has its own background: the one used in the novel Raazbal, written by the author of the game and published in 2010.&#10;&#10;It is one game system that presents many different game modes:&#10;Standard mode with a Dark Player: The Dark Player is one more player who competes against the other players. In this mode some quests have an undefined length and finish when the quest&acute;s goal is achieved. Others have a settled number of turns assigned. Players may gain experience which improves their attributes and skills according to the cooperative achievements of the players&acute;group.&#10;&#10; Individual mode: players gain experience according to their individual achievements.&#10; Cooperative mode (including lone-wolf player.): a 100% cooperative game, with an Artificial Dark Player.&#10; RPG mode: the Dark Player is omniscient (just like a classical RPG master).&#10; Open-map mode: scenarios without a gridded floor.&#10;&#10;&#10;&mdash;description from the publisher&#10;&#10;