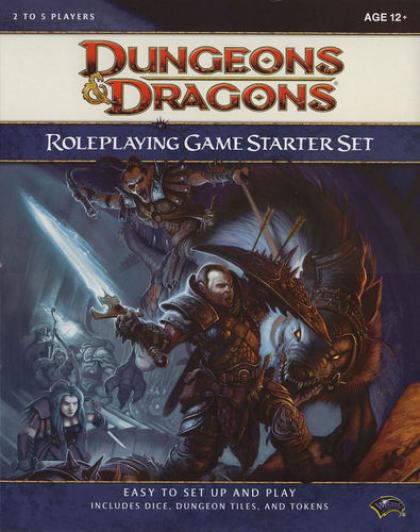 "Enter a World of Adventure and Imagination! Run the Game: build your own dungeons and pit your friends against monsters and villains! Play the Game: explore the dungeon with your friends, fight the monsters, and bring back the treasure!

Another version of Wizards of the Coast's dungeon crawl board game-style introduction to D&D, inspired by boardgames like "HeroQuest" and "Advanced HeroQuest" (which in turn were inspired by the original Dungeons & Dragons role-playing games.) These basic/starter boxed sets attempt to bridge the gap between miniatures board games, miniatures war games, and role-playing games by using a board-and-counter/miniature format with simplified versions of the Dungeons & Dragons rules.

This entry returns to cardboard counters used in the 2000 "Adventure Game" version, after a couple "Basic Game" versions using miniatures released in 2004 and 2006; this version updates the rules set to D&D 4th Edition, and continues the tradition of including completely new adventures and selections of monsters and pre-generated player characters, but is otherwise virtually the same product as its predecessors, and this line of games would be joined in 2010 by yet another updated, "Red Box" 4th Edition Essentials basic/starter game version.

All these basic/starter games are direct fore-runners of the "Dungeons & Dragons Adventure System" boardgames ("Castle Ravenloft" and "Wrath of Ashardalon"), which are still simplified versions of the D&D rules set using tile-based game boards and miniatures.

The box cover of this version says "2-5 players", but there are enough included materials for 6 players (5 pre-generated Player-Characters, and one Dungeon Master.)