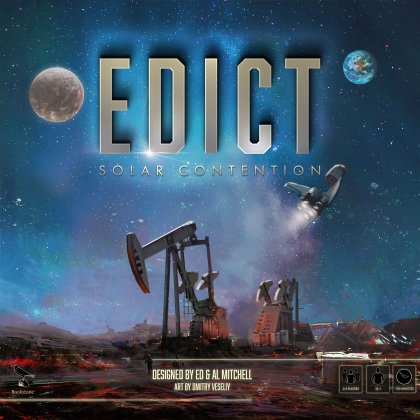 In the near future, humanity renews itself. Economies revive and nations look again to the stars as humanity rediscovers the urge to reach beyond the confines of planet Earth. Collectively, Earth&rsquo;s nations and people set a course for the exploration of the solar system and exploitation of the resources it has to offer. Together, they set forth the Edict. The Edict is a demand and a licence for the most capable to venture into space under the mandate of harvesting extra-terrestrial resources for the enrichment of the people of Earth. Five organisations race out into the solar system to discover and capitalise on the raw materials buried within the planets, moons, asteroids, and debris beyond Earth&rsquo;s heavens. Who among them will gain ascendency in a race to establish a commercial empire in answer to the Edict?&#10;&#10;You control one of these powerful organisations. Your aim is to explore, exploit and expand your influence into the solar system and export back resources essential to Earth. Your organisation&rsquo;s capabilities and options are dependent on the executives you recruit to manage your Mission Control.&#10;&#10;The winner of the game is the player with the most Victory Points at the close of Earth&rsquo;s final Edict. Victory Points are earned through the accumulation of Solar Credits as well as achievements in scientific brilliance, political might and supremacy of exploration. By colonising new worlds, investing in ground-breaking technologies and recruiting the most distinguished minds in space exploration you will drive your organisation to control the stars and pave the way for new frontiers of humanity.&#10;&#10;The game is advanced by fulfilling the demands of Earth as displayed on the Edict card, which are met by returning resources to Earth. Players take turns clockwise to use one of the four Mission Control departments that lists available actions dependent on the associated executive. Departments are improved by recruiting new executives. The recruitment round starts after each Edict is complete and gives all players an opportunity to bring in new talent.&#10;&#10;&mdash;description from the publisher&#10;&#10;