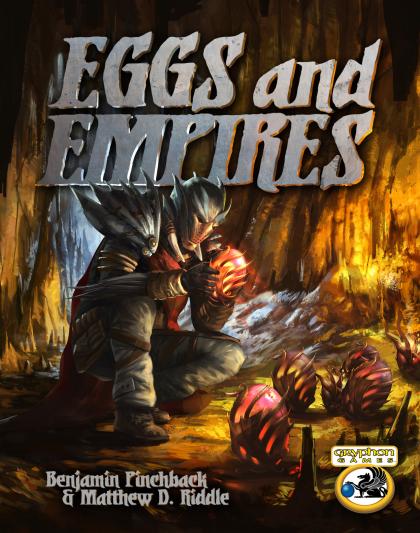 Eggs from the dragons of Ridback Mountain are valuable — not quite as valuable as gold following the last market fluctuation, but still TOTALLY worth the hassle, especially since it's not like YOU are climbing the mountain and searching through dragon caves. That's what peasants are for...

All the empires have sent their intrepid adventurers out to collect eggs, but not all will succeed! It gets crowded on Ridback Mountain, and there are only so many dragon eggs to go around — not to mention that the dragons have started mixing exploding eggs into their nests, and those hurt.

In the fast-playing card game Eggs and Empires, players use matching decks of empire cards that contain adventurers numbered 1-10. Starting with a hand of three empire cards, each turn all players select one card from their hand, then play them simultaneously in an attempt to collect egg cards. Typically, the player who played the highest empire card chooses an egg first, then the player with the second highest empire card, and so on until all revealed eggs are collected, if possible. However, each empire card has a unique power that can affect the order in which eggs are selected. The powers interact in strategic and awesome ways so that every hand is exciting and fun!

Outwit your opponents to collect as many good eggs as possible — that is, ones worth victory points (VPs) — while avoiding those nasty exploding eggs! Whoever collects the most VPs over three rounds wins.