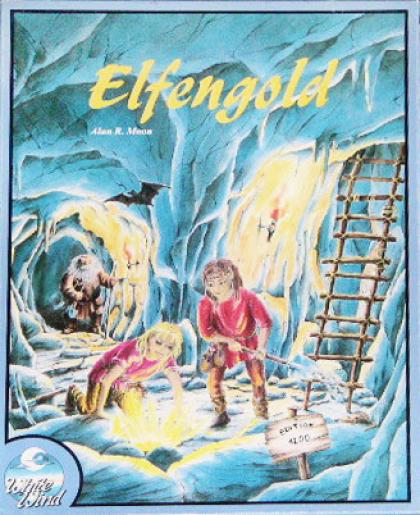 Note: that this game is NOT to be confused with the Elfengold expansion set of the same name (also designed by Alan Moon).

Once upon a time in the Land of the White Winds...
...there was an old and good-natured troll who owned a prosperous mine. The mine was so prosperous, in fact, that the troll had accumulated enough wealth to retire after years of hard work.
Once a year, the elves who live in the forests near the mine celebrate their Great Wood Fair. One of the highlights of each Fair is the mining competition. The troll, who enjoys the Fair just as much as the elves, gladly opens up the mine to let the elves dig for gold. Only the fastest and luckiest elf is allowed to keep his gold though, so while the competition is friendly, it is also very challenging. No one seems to care that the elves try to hinder each other by hiding stones where they think their fellow competitors will dig. In the end, it is the most clever elf who will win and stake a claim to his gold.

This is an simple bluffing game from the White Wind stable. Players spend money to buy shovels & pickaxes to dig for gold. They then enter the mine, and start to dig. But wait!! players also get to place broken shovel and decoy counters on the board as well. A broken shovel means no gold, and you lose the implement you were digging with. All decoys (or no counters) means you get the gold value on the board space you're digging from. The question is - to dig or not to dig??

The winner is the first to 50 gold, or the highest gold when someone with 50 gold gets out of the mine.