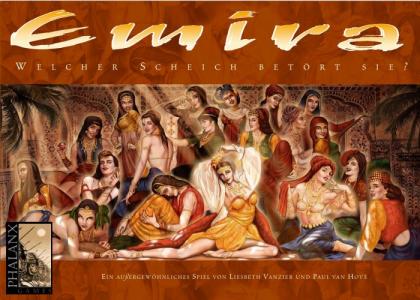 In Emira the players are Arabian Sheiks looking to expand their harem with more princesses. They try to make themselves more attractive to convince as many princesses as possible to come to live in their harem. Each round, another princess with different preferences comes into play and chooses the sheik that she is most attracted to.

The game is played in several rounds. The 3 to 5 players have auctions where they bid to perform actions: play event cards, buying spice caravans, palace sections, camels, or improve his appearance and status. After all players have performed an action the princess will chose which sheik she prefers (according to her preferences).

Each player has a goal card that defines his goal for the game, for example acquire 4 princesses with three specific skills or 6 princesses.