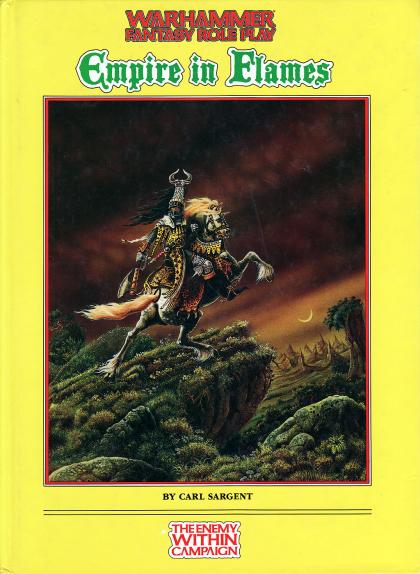 The enemy within Campaign, Vol. 5

"Graf Boris, Ar-Ulric and myself have talked for many hours. We planned and thought, but in the end we realised that desperate times need desperate measures.

"We want to find Ghal-maraz, the Hammer of Sigmar Heldenhammer."

The Emperor is weak - maybe ready to abdicate. The Empire is torn by internal strife: old hatreds are remembered and new ones invented. Summoned to meet the Graf of Middenheim, the adventurers are embroiled in high politics and sudden death. Civil war looms, and a symbol of unity must be found before too much blood is spilled - the legendary Hammer of Sigmar, the founder of the Empire! With time against them, the adventurers must travel deep into Black Fire Mountains, following a trail which is 2,500 years old!

This 144-page adventure is the concluding part of the Enemy Within campaign for Warhammer Fantasy Roleplay. Optional starting points are included, so that this adventure may be played as a continuation of Power Behind the Throne or Something Rotten in Kislev. Also included are 8 pull-out pages of player hand-outs.