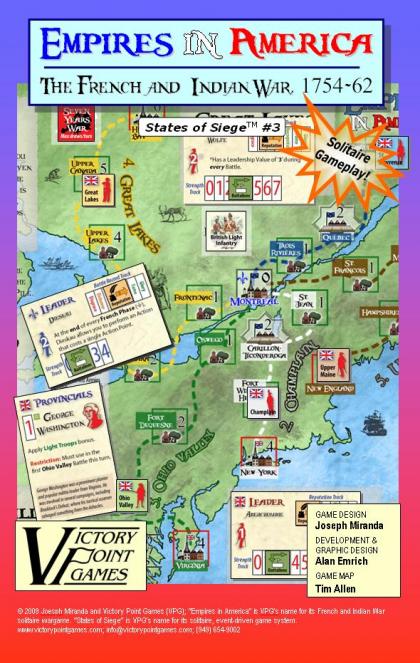 Empires in America is a States of Siege(TM) series game on the French and Indian War (1754-62) created by veteran designer, Joe Miranda. With riveting solitaire gameplay action, you must command the beleaguered colony of New France, from Halifax to the Ohio Valley, while Britain and her American colonies press in from all sides with war raging from the fortress of Quebec to the Monongahela.

Employing Leaders to command the opposing Armies, Empires in America presents a new focus on the important historical personages of this era like Montcalm, Wolfe and even a young George Washington. These Leaders establish their reputations as their fortunes wax and wane on campaign across the far-flung frontiers of colonial North America.

Can the Montreal Militia and Algonquin Indians defeat General Braddock’s redcoats before they reach Fort Duquesne? Can your Troupes de la Marine stop Rogers’ Rangers at Fort Ticonderoga? Will the Royal Navy sail up the St. Lawrence River to support operations against Quebec? Can court intrigue at Versailles undermine the machinations of William Pitt (the Elder)? Find out as you defend Montreal in Empires in America.

Complexity: 3 on a 9 scale
Solitaire Suitability: 9 on a 9 scale
Scale: Each unit is one British Army, each Leader commands several Battalions