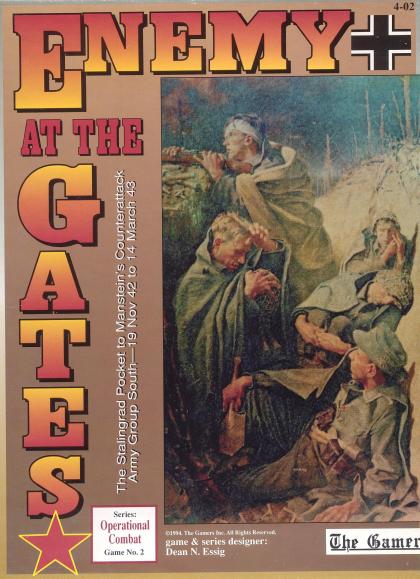 Enemy at the Gates

Enemy at the Gates - The Stalingrad Pocket to Manstein's Counterattack Army Group South - 19 Nov '42 to 14 March '43, is an OCS game about the Uranus Counteroffensive to encircle Stalingrad and the subsequent "Backhand Blow" of Manstein in the fourth battle for Kharkov.

(from the Game Box:)

On a cold, foggy morning in November, 1942, a four-hour artillery barrage rocked the Rumanian lines north and south of Stalingrad. Countless swarms of Red infantry, tanks, and guns then swept the lines. In four days, the pincers met near Kalach-um-Don – entombing the 6th Army in Stalingrad. During the next three months, the Germans will reel from successive Soviet hammer blows, try in vain to relieve the 6th Army, and fail to supply it from the air. The 6th Army surrenders, and only the counter-attack by von Manstein’s panzers stop the red tide. The turning point of World War II in Europe has passed.

Enemy at the Gates, the second Operational Combat Series release by The Gamers, offers players different challenges from those in the very popular game Guderian’s Blitzkrieg. The Soviet army has rearmed and reorganized their Tank Corps – their challenge to the Panzer Divisions. The unique force structures of each side force players to fight differently in order to maximize their strengths. And, of course, players must face the toughest operation and strategic choices they have ever faced. When to stand, when to run…and when to strike.

Enemy at the Gates covers the entire period from 19 November 1942 to mid-March 1943. There are numerous one and two map scenarios. The game covers Operation Uranus, Operation Little Saturn, the German Relief and airlift efforts, and Operation Star and Gallup (to include von Manstein’s famous “backhand blow”).

Extensively researched, playtested, and developed, Enemy at the Gates will satisfy the Eastern Front interest of any gamer who wants to know more than the pulp-history version of these pivotal events!

Features:
Dynamic and fluid situation
All of the pivotal battles in AG South
The creation of the Stalingrad pocket
The relief effort and airlift
Mansteins famous Backhand Blow!
Follow-on to the popular Guderian's Blitzkrieg game and system- refined based on player feedback
Player skill is highly rewarded

Voti e commenti per Enemy at the Gates