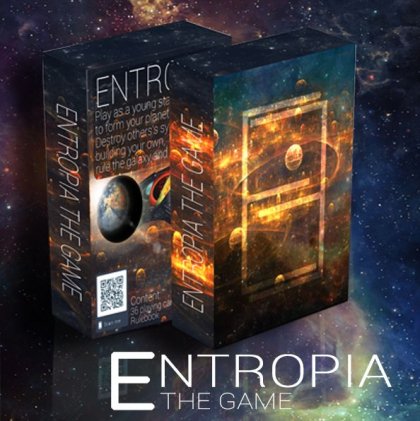 Entropia gives you the chance of stepping into the shoes of a young powerful star, fighting to forge your own planetary system out of chaos. In this chaotic universe, each player is a young star trying to control the galaxy where they live, and prevent the other players from seizing power. Why on earth would you dream of controlling the chaos and fighting against other stars? Well, to become the brightest and the most powerful star of the galaxy! Do not miss your chance, show the other stars how badass you are!&#10;&#10;Playing the Game: To start playing Entropia, deal three cards to each player and place the deck on the centre. One of the players goes first and the game starts. During your turn, you can choose and perform only one action, which can consist in drawing a card from the deck or playing one of your cards, then the turn passes to the next player in rotation.&#10;&#10;All cards in the deck stand for a planet and you can use them to perform different actions: for example, you can use your card to attract planets with your gravity by putting the card on the board in front of you (using the keyword Attract), you can convert the mass of a planet into pure energy (using the keyword Fuse) in order to draw new cards from the deck, play an extra card during your turn or scupper the strategies of the other players by destroying their planets. Moreover, you can also discard your cards when your planets have the same mass of your adversary&rsquo;s planets (using the keyword Annihilate) in order to stop other players heading all the way to the winning.&#10;&#10;Since the first person to control four planets wins the game, every player should develop unique strategies to destroy other players&rsquo; cards and conquer the four planets as fast as she/he can. Even though the game looks simple and easy to play at first glance, you will need to devise strategies to control overpowered cards and use them wisely. It&rsquo;s up to you whether you want to greedily take over all the four planets or slowly destroy your enemies&rsquo; resources: there are more methods and strategies you can use to win over the other players, so come and discover them while playing. You need to sharpen your weapons and grit your teeth to be the next champion of Entropia!&#10;&#10;&mdash;description from the publisher&#10;&#10;