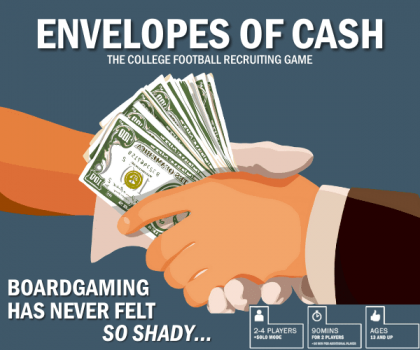 Envelopes of Cash is a Euro board game with a very American theme: college football recruiting. Players square off as rival college programs, doing their best to attract the most valuable high schoolers to join their college teams.&#10;&#10;Game play is driven by a card draft, in which players acquire the potential to hire new personnel, build new facilities, strengthen their program's culture, or boost their fundraising prowess, but to actually put those cards into play, the need to generate income via careful selection of 6 different colored dice, which are rolled at the start of each turn. Those dice generate the most valuable currency in the game -- Envelopes of Cash -- which are used to lure the athletes to your program. To succeed, you need to balance the benefits of your cards, which make recruiting easier, with the nuts and bolts of actually getting out there and recruiting, by sending lots of recruiting mail, traveling to visit the athletes in their home states, and most importantly, slipping them those valuable tokens of your affection in little colored envelopes.&#10;&#10;You only have 12 months to gather as many different recruits across a variety of football positions (like QB, LB, etc.), so the tension between less income now vs. more income later plays a role in shaping your strategy. Should you jump out to a quick start and get the best recruits before your opponents, or should you build up a big stash of envelopes of cash and have a major blow out month towards the end of the year. Or can you build a strategy more around your personnel and culture, turning their special abilities into a victory point engine and leave the grubby business of bribes to others?&#10;&#10;Envelopes of Cash lets you be the head coach of a major football program, working closely with your bag men to make sure you come out on top in the race for the most recruiting points. With 120 different cards and a different mix of recruits across regions each time, the game offers high replay value, especially since there are many different ways to build a successful program that churns out points.&#10;&#10;&mdash;description from the designer&#10;&#10;