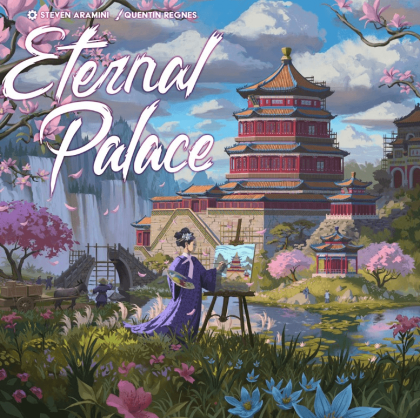 In Eternal Palace, you are a noble family who has pledged to help the Emperor rebuild his palace left derelict for centuries so that you may gain his favor. You must send your team to collect resources and rebuild monuments. You will also honor the Emperor by painting a beautiful picture of his beloved gardens and palace &mdash; but others are trying to impress him, too, and only one will have the honor of being chosen as the Emperor's favorite.&#10;&#10;In this game, your team of workers is represented by dice, and by placing them on the game board you contribute towards rebuilding the different parts of the Eternal Palace. Each location is reached based on dice rolls, but if others have gone to an otherwise inaccessible location, you may visit it too by paying fish, one of the resources in the game. Complete tasks first &mdash; or contribute more than your competitors to these monuments &mdash; to earn tokens reflecting your overall effort. Recruit new workers to your team, and use the painting pieces you receive as each location is unlocked to &quot;paint&quot; a record of your work, layer by layer.&#10;&#10;Who will contribute the most to the reconstruction and gain the favor of the Emperor? Find out in this tense and highly interactive Eurogame!&#10;&#10;