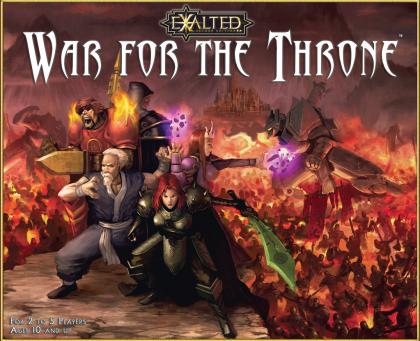 Exalted: War for the Throne

The Empire Could Be Yours!

In a vast, fantastic world known as Creation, a dynastic empire called the Realm stood for hundreds of years, presided over by the powerful and cunning Scarlet Empress. She reigned with an absolute hand until the day she mysteriously disappeared, leaving a legacy of ruin. Before long, suitors to the throne dared make their bid for power. You are one of the contenders for the Scarlet Throne, a Dragon-Blooded who has amassed the vast armies, fortunes and magic necessary to seize your destiny. You seek to claim dominions and raise war manses, building power until you have the lore and strength to claim the Imperial Manse for your own.

Exalted: War for the Throne is a strategy board game for two to five players set in the world of Exalted®. Players amass legions, coin and essence, and bring all of their allies, will and luck to bear to claim the seat of power and become the new emperor of the Realm.

• A fold-out board with a map of the Blessed Isle, the battleground for the throne

• 5 different aspects from which to choose, all with their own playing pieces and unique powers

• 50 Events Cards and 25 Charm Cards with which to attack, deceive and stymie opponents

• All the dice you need to play

Voti e commenti per Exalted: War for the Throne