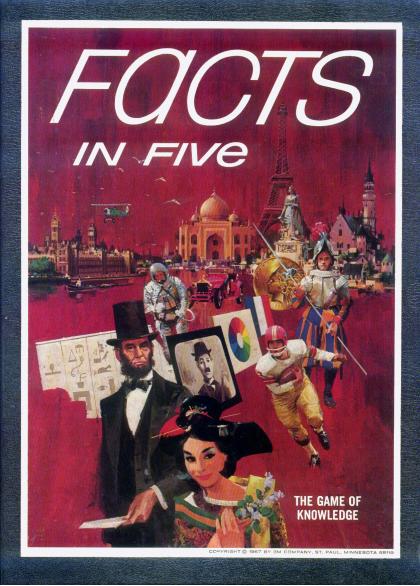 Part of the 3M Bookshelf Series.

Five cards are drawn. Each card contains a "class" and a list of "categories". A category is selected for each class and the players and five letter tiles are drawn. The players have 5 minutes to come up with an example that begins with each letter for each class/category.

2007 update: Now part of University Game's Bookcase Series. The game has been updated to remove many of the esoteric categories (foreign words, spelling, authors of ______ descent). It's now much more a test of pop culture trivial knowledge and there is no longer the option to select a category only. One must now pick a Category and Topic (the term 'class' was removed). Also, the letter distribution was updated. The box indicates that this edition is copyright 2006.
Contents:
-56 cards
-52 letter chips
-Master Score Pad
-Playing Card Sheets
-Sand Timer(5 minutes)
-Plastic Storage Tray
-Rules(inside lid)
-How to Score Sheet
1967 3M & 1976 Avalon Hill edition differences
-Rules are separate (NOT on inside lid)
-only 30 letter chips (1 of each letter plus 4 wild *'s)