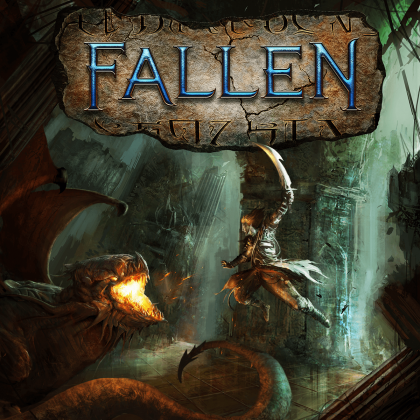 Fallen is a two-player card and dice game with fast and challenging game play, gorgeous art, and plenty of re-playability all wrapped up in an ever-changing story.&#10;&#10;One player chooses a Hero to delve deep within a dungeon, seeking the ultimate evil that waits below. Play as Seroth the Pit Fighter and fight to win at any cost, Merace the Sorceress and cast devastating spells, or Ranek the Thief striking from the shadows.&#10;&#10;Every Hero comes with a unique character card depicting the hero and the special abilities and proficiencies of that particular character. Each hero also comes with nine unique skills to choose from which are divided into three skill trees catering to a particular proficiency. Ten signature Power cards also come with each hero, giving them special abilities that are themed to their style of play.&#10;&#10;The second player takes on the role of the Dungeon Lord, summoning vile creatures and ancient spells to defeat the Hero. Play as the Archivist of Souls weaving dark spells that plague the hero, the Forge Master, part wizard and part machine, filling the dungeon corridors with horribly augmented monstrosities, or as Krogarn the Ogre king sending your primal horde and spirit magic to hunt down the adventurer.&#10;&#10;Similar to the Hero, the Dungeon Lord has a character card that depicts the chosen form as well as showing the special abilities used by that character. In addition, ten signature Power cards come with each Dungeon Lord that are specific to style of villainy.&#10;&#10;Unique Story cards bring the dungeons of Fallen to life. These cards deliver an immersive dungeon experience for players new to gaming, yet have deeper mechanics to keep even die-hard players on their toes.&#10;&#10;After adventuring through the dungeon, the Hero and Dungeon Lord clash in an epic battle between good and evil. The challenges are fast and furious as cards are played and custom dice are rolled.&#10;&#10;This is the game of Fallen.&#10;&#10;Featuring&#10;&#10;- Play as one of three legendary Heroes OR play as one of three sinister Dungeon Lords&#10;- Custom dice&#10;- Story cards that drive the action&#10;- Customizable Heroes&#10;- A full dungeon experience in 90 minutes&#10;&#10;