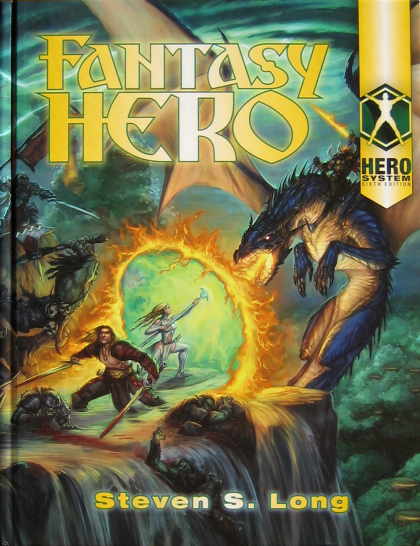 Back Cover:
WONDROUS WORLDS OF FANTASY!

Fantasy Hero discusses and describes the Fantasy genre for gaming, and shows how to create characters, campaigns, spells and magic systems, kingdoms, and other elements of Fantasy with the HERO System rules. It includes:

a complete review of the Fantasy genre, from the most mundane Low Fantasy and Urban Fantasy tales to wondrous and bizarre High Fantasy and Epic Fantasy sagas, with guidelines and suggestions for simulating each part of the genre using the HERO System rules
an extensive section on creating Fantasy characters in the HERO System, including over five dozen Package Deals for major character races, backgrounds, and professions
Fantasy-specific combat and adventuring rules, including expanded rules for weapons, sieges, and mass combat
a detailed chapter on magic, describing how to create magic systems, spells, and enchanted items, with dozens of examples to get you started
discussions about Fantasy civilizations and cultures, with guidelines for economies and currencies, travel times and methods, religion, and much more
a comprehensive chapter on gamemastering Fantasy games