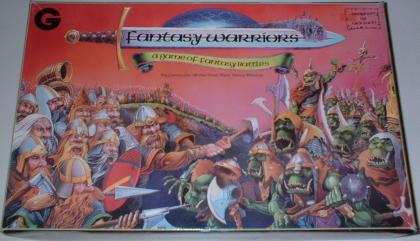 From the rules introduction:

With its simple but challenging rule systems, Fantasy Warriors will let you fight exciting fantasy battles, full of insane heroism, low cunning and sudden death. Everything you need, except a playing surface, is here - over 100 miniatures, an easy-to-understand rulebook, lots of counters, dice and even a ruler.

The object of the game is simple - to defeat your enemy using any tactics or strategem you can find. In Fantasy Warriors there's much more to battle than launching your army in a head on attack - discover the perils and rewards of scouting, boasts, omens, threats and, of course, magic.

Each player controls an army, headed by a war chief who issues orders to the troops under his command. Giving the right orders and changing them when the moment is right is the essence of generalship in Fantasy Warriors. How well will you do in the battle of wits between opposing players?

You can play the game with forces of any size, from small skirmishes of 20 to 40 figures a side to epic clashes between several armies, containing hundreds of figures. Battles may be fought between two players, each with an army, or groups of players forming tabletop alliances. You don't need any sort of referee or games master.

There's no book keeping in Fantasy Warriors and, after you have decided on your forces, there's no need for pencil and paper. Once the battle is under way, the colourful counters supplied with the game will give you all the information you need.