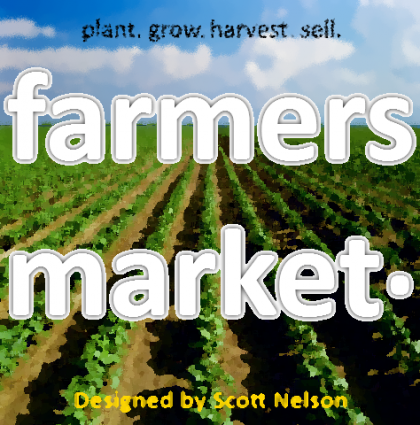 Plant. Grow. Harvest. Sell. Farmers Market is a game themed around supplying customers with what they desire at the local farmers market. During the game, players will plant corn, wheat grain, potatoes seeds, wait for them to grow so they can harvest them. Milk can be drawn from Cows, and the rare chicken can also be found annoying the players if they don't supply a customer who needs one or build a coop. After the goods are ready, they can be transported to the River Street Farmers Market for consumption.

Other options in the game include advancing the technology to get a greater harvest, adding Chickens to a Coop, planting long-growing watermelons (the hit of the day), and attending State Fairs, entering your vegetables into the largest such and such competition (in theme only).

Deck manipulation is the main mechanism in farmers market. Players each have their own deck of staple cards. Unlike a normal deck builder, during the game, only a few cards will be added to their deck (plant), and most that have been added will also be removed the next time it shows up (growth-to-harvest). More of a Deck Freeloader system or cards "just passing through" the Deck.