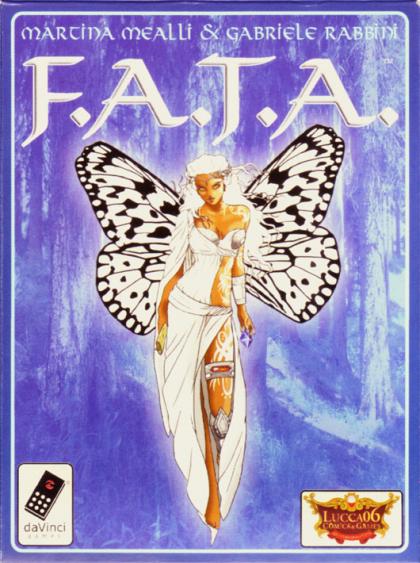 This game has been published by dV Giochi as a reward for winning the 2005/2006 edition of the Gioco Inedito – Best Unpublished game contest.Powered by Lucca comics & Games and dV Giochi, the contest aims to identify the best new card game design from all prototypes received and to reward it by publishing the game in a fully professional and high-quality format, overseen directly by dV Giochi. All prototypes submitted must conform to the technical and style requirements, fixed components and a given theme which changes every year. Everybody can join the contest and this is a great opportunity for emerging game designers to see their idea published.
For more information:
giocoinedito@luccacomicsandgames.com
www.luccacomicsandgames.com

The theme of the award was “Faeries and Legends”; F.A.T.A. ("fata" is Italian for "fairy") is a very clever and elegant card game that won hands down.

It features a deck of 110 cards. Each player belongs to a Techno-Fantasy Tribe of faeries and tries to catch the greater number of treasures by playing "tri-spells" (combination of three cards) and/or beating other players.

During his turn, the player may play a special "charm" card, then he may steal a card in front of another player (with a rock-paper-scissors system printed on the cards), then he may finally play up to two cards in front of himself.
Each player have two "virtual" columns where playing cards: the first card of a column is played normally, the second card is played rotated by 180°, the third card completes the column (the "Tri-spell") and must be placed rotated by 90°.
The three cards of a tri-spell have a different meaning: the first card is for deciding the performed action, the second for the number and kind of targets, the third for the power of the spell.

Each player have also a designed enemy (secret role assignment at the start of the game): if he defeat this player, he's the winner. If nobody reach this target, the winner is the player with the most treasure at the end of the game.

One of the authors, Martina Mealli, she's also the illustrator of the cards.