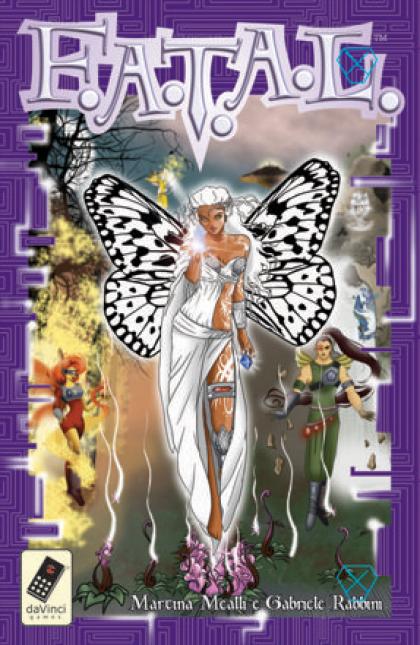 Around 1300 a supernatural event opened a few breaches between two distant worlds: ours and the world of FATAL. Following this event, the Queen of Fatal disappeared and a few enchanters left that world and arrived on Earth.

The five breaches in Europe gave origin to as many magic birth-signs: Flambeaux (Paris), Aquaté (Brno), Terranova (Rome), Ångbåt (Tallinn), Lichtenborn (Nuremberg). Five families who over the centuries kept wavering between open war and armed peace, but who never lived in harmony.

Since then, the enchanters have influenced humans politics, arts and science: either directly or by inspiring and taking control over all humans who were useful for their cause, and FATAL is a piece of this tale.

The game features a deck of 110 cards. Each player belongs to one of the birth-signs and tries to catch the greater number of treasures by playing "trimagics" (combination of three cards) and/or beating other players.

During his turn, the player:

may play a special "enchantment" card,
may steal a card in front of another player (with a rock-paper-scissors system printed on the cards),
may play up to two cards in front of himself.

Each player has two "virtual" columns where he can play cards: the first card of a column is played normally, the second card is played rotated by 180°, the third card completes the column (the "trimagic") and must be placed rotated by 90°.
The three cards of a tri-spell have a different meaning: the first card decides the performed action, the second one fixes the number of targets or the power of the spell, the third one closes the trimagic.

Each player has also a designed enemy (by secret role assignment at the start of the game): if he defeats this player, he is the winner. If nobody reaches this goal, the winner is the player with the most powerful treasures at the end of the game.

One of the authors, Martina Mealli, she is also the illustrator of the cards.