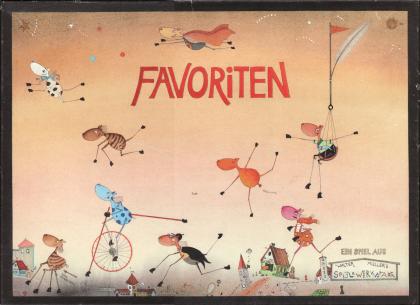 Favoriten is a simple betting/race game with a nifty element of press-your-luck thrown in.

Five horses are involved in each of three races. Players do not own any horse. Rather, they each have three betting chips. On a player's turn, she/he rolls a die and moves one of the five horses forward based on the result of the roll. The race track pictured on the board has two lanes. These lanes are used by the player to keep track of which horses have been moved in the current turn. At the start of a turn all of the horses shall be in the same lane. Then as a player moves the horses forward, he/she also moves them to the other lane. The player continues until they've rolled five times and moved each horse once. The lane from where the horses started the turn will be empty.

That's simple enough. But before each turn, players are allowed to place a bet on a horse (starting with the rolling player). After a person places a bet (e.g. "I'll back the green horse") the next player can choose to or not to place a bet. This continues until all players decline to place a betting chip. Then the player starts rolling and moving horses.

Eventually, three horses will cross the finish line and will pay out for win, place, or show positions. The player who first placed a bet on the winning horse claims the greatest payoff. Payoffs diminish the longer a player waited to support a horse (e.g. the second person to bet on the horse that ultimately wins pays less than the first player to back the second-place horse).

The constant wait-and-see is agonizing. If you back an unpopular horse, you'll watch it lag behind. If you wait until everyone else is pushing a particular horse, you gain very little for joining the bandwagon late in the game.