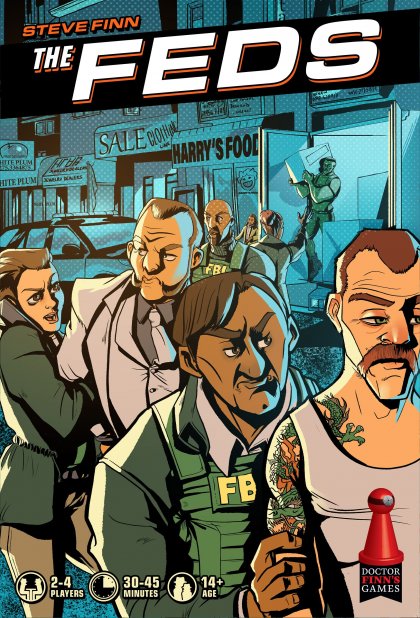 Organized crime has overtaken Capitol City. Headquarters wants you and your team to infiltrate the ranks, identify the key players, and break up the syndicate. Do you have what it takes to put a stop to their insidious operations?&#10;&#10;In The Feds, players are leaders of FBI units seeking to send agents out to combat crime by making arrests and confiscating contraband. The game is heavily inspired by Gunrunners, an earlier game by the same designer and publisher.&#10;&#10;The game is played over a series of turns. On each turn, a player performs 3 actions: (1) reveals gang activity, (2) deploys an agent, (3) performs a police operation. In step 1, a card is flipped and criminals/crates are placed into one of the game's locations. In step 2, a player places his agent to do surveillance in an area, which forces another player's agent into the field at that location (where it can do its work). In step 3, the player moves a police car around a rondel to either acquire a special ability (to use later) or make an arrest (to score points).&#10;&#10;When a designated number of agents are placed at the different locations, a bust occurs and players make arrests and confiscate contraband based on the strength of their agents at the locations. After 4 busts, the game ends and the player with the most arrests/confiscations wins.&#10;&#10;-description from designer&#10;&#10;