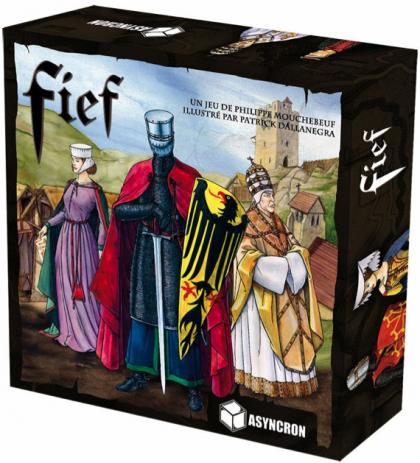 Fief is a game of strategic conquest and diplomacy that simulates a military, economic, and political fight between several lords in the Middle Ages – with players being those lords and representing noble families that want to have the most powerful kingdom in the land.

Fief is played in a fictional kingdom in the Middle Ages, with the villages connected by roads and each village belonging to both a fief and a bishopric. Each player starts with a lord, a castle and some troops in one of the villages.

At the end of each round, check to see whether one or more players have won, with shared wins being possible through alliances created by marriage. Winning solo is tough, so players need to negotiate, make deals and form alliances. To do this, players use their three embassy pawns; by spending a pawn, a player can have a three-minute-long private conversation with one or more other players to make whatever deals they wish. You have only three pawns, so plan well for these talks!

Players draw cards each round: character cards that can bring new lords into play and event cards such as good harvests, good weather and taxes. They pay the costs to play cards, with some cards being playable at any time to upset current events with a surprise assassination or underground invasion. Players then receive income, with which they can buy troops and buildings, and move lords and troops among villages, with troops never being able to travel without a lord. If troops from more than one player end up in the same village, they battle until one side is eliminated or forced to flee.

If a player controls all villages in a fief and has at least one castle there, he can purchase the title of the fief and assign it to a lord, with the title being passed to an heir if the lord subsequently dies. Players also try to secure the titles of king and pope, which provide benefits of their own, as well as points. Each title of fief, king or pope is worth a point, and the first player to collect three points wins. Two players win if they are allied and have a total of four points.

The 2011 version of Fief has vastly revised rules with new materials and set-ups for shorter game play in addition to the long game.