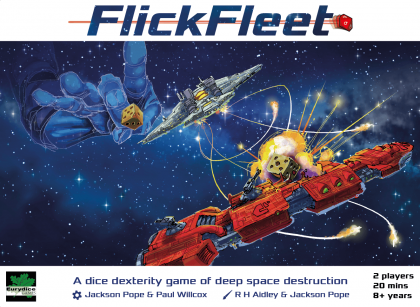 For 10,000 years the Imperium of Earth has ruled the stars with an iron fist but now The Uprising have thrown off their totalitarian yoke and are gathering a following and a fleet. An Imperial battle fleet is dispatched from Earth to end them...&#10;&#10;The fate of the fleet is in your hands, literally. Flick your ships to move. Flick dice to attack. FlickFleet is a two player dice dexterity game which combines tactical ship-to-ship combat with a dexterity element. Raise your shields and get your flicking finger ready!&#10;&#10;The game can be played as a points-based freeform game, with each player choosing the ships they wish to field, or by using one of a number of scenarios. Includes 22 fighters, bombers and capital ships in the box and five introductory scenarios in the rulebook (with more available online).&#10;&#10;&mdash;description from the publisher&#10;&#10;