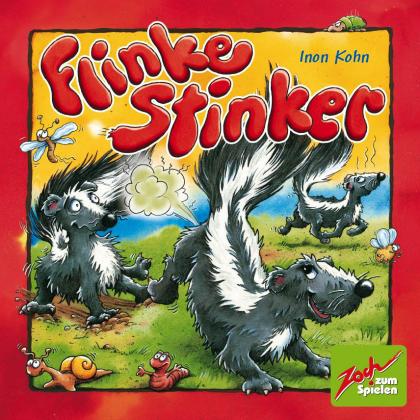 “Flinke Stinker” is a funny animal memory race with beautiful game pieces in a hilarious skunk world. The players are revealing cards. In order to move their skunks forward as quickly as possible they try to find “the right way” in the form of skunk tracks.

However, every once in a while, the ravenous puma appears. Smart as it is, it just pinched off its
nose, thus, it doesn’t need to pay attention to the smell of the skunks and can easily thwart them.

Then you give all collected track cards to the other players and try to memorize where the puma lurks. Stinking boots, mud holes and old cheese are further obstacles that have to be avoided.

Only alert players can find the right tracks around the puma and can also overtake other skunks. Once overtaken and provided with the opponent’s scent, a skunk is sent back a couple of spaces.

The player whose skunk reaches the final tile first wins.