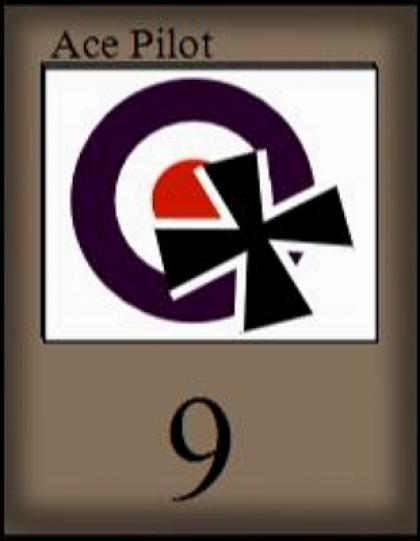 “Card game for 2 players. WWI Aerial Dogfight Simulation. One player is the Germans, the other is the Allies. Victory: The first player to shoot down 4 enemy machines wins the battle. Use coins to keep track of ‘Kills.’”

The game is played using a custom card deck comprised of six suits made up of twelve cards numbered 1 to 12. These suits are Pilots, Allied Planes, German Planes, Tactics, Shooting, and Flying. All of the cards are usable by either player except for the Plane Cards - Allied Planes may only be used by the Allied player and German Planes may only be used by the German player.

Each turn the players are dealt hands of five cards. They may discard and redraw up to three cards. Each player then plays an Attack which must include a Pilot card and a Plane card. An attack may also include one card from each of the other three suits (Shooting, Tactics, and Flying.) A kill is scored when the total value of the cards played in an Attack is equal to or greater than the Attack played by the opposing player.