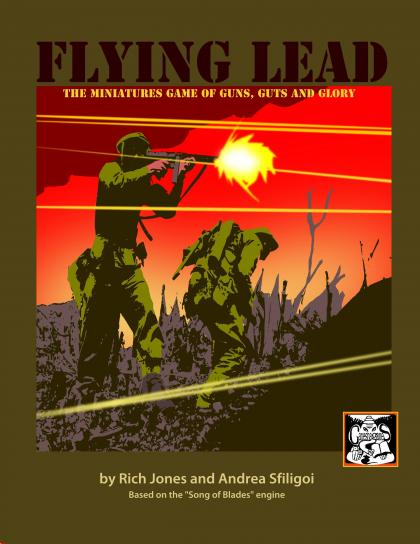 Flying Lead can be used to play tabletop actions in a wide range of genres. From gang warfare to Pulp action, from military operations to black-clad assassins, Flying Lead supplies furious fun at bullet speed! Lead a gang of mobsters, play cops vs crooks, or enter the brutal world of covert special operations and espionage.

But will you have the guts to lead your force to glory in world where a street punk or an armed fanatic can blow you away as effectively as a trained soldier? Pick your force, roll those dice and find out!

Flying Lead takes the award-winning Song of Blades and Heroes mechanics into, and even beyond, the modern world of high-powered projectile weapons. These core rules will enable you to play using a small table area and a handful of figures. By using our online force, weapon and vehicle generators, players will be able to customize their characters and get playing straight away.

you will find rules for:

The rules can be played in any scale, with five to 15 models per player; a standard game takes around 45-60 minutes once you know the rules.