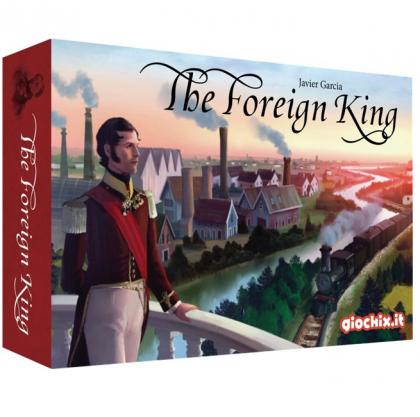 Incited by the economic and political interests of the bourgeoisie, a liberal regime of monarchy was constituted in Belgium on 1830 gaining the independence from the United Kingdom of the Netherlands.

The Congress of the new fragile Kingdom called the German Prince Leopold of Saxe Coburg and Saafeld to occupy the Throne: the first Belgian King, Leopold I, took office in the 1831. The new foreign King must solve many problems starting from the industrialization of a rural Country divided by different political and religious groups.

In The Foreign King, players take on the roles of influential Belgian bourgeoisie and who industrialize Belgian provinces, build metallurgical and textile factories in order to obtain greater economic power, vote in the National Congress seeking to increase their political influence, expand its social mass and send to the provinces under their dominion at the highest authority, King Leopold I of Belgium, to revise the provinces in the pursuit of their own interests.

The player with the most victory points at the end of the game will win the game.