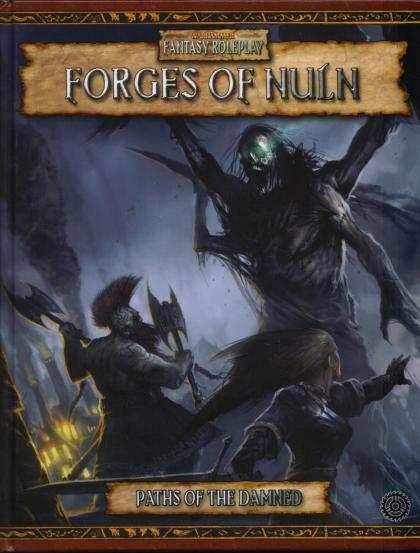 The third and final adventure in the Paths of the Damned campaign, set in the city of Nuln. Includes the adventure itself, a guide to Nuln, a city map, plot seeds and pre-generated characters.

From the back cover:
"Forges of Nuln is the final step along the Paths of the Damned campaign, and the road thus far has proved long indeed. Having thwarted Chaos in Ashes of Middenheim, foiled plots amidst the Spires of Altdorf, there is one last chance for Chaos to unleash hell in the Old World. The gun forges of Nuln belch sulphurous smoke into the sky, yet beneath the fumes there is the inescapable reek of Chaos corruption.
The city of Nuln - 'The Jewel of the Empire' - is ready to unveil the Imperial Gunnery school's finest creation - the gleaming cannon known simply as 'The Magnus'. Nobles the Empire over have been summoned by the capricious Countess of Nuln - Emmanuelle von Liebwitz. Many seek an invite to one of her glittering Masquerades, but whilst the nobility dance, death stalks the streets.
Sharp wits and desperate measures are required if the city, and indeed the Empire, is to be saved a terrible fate. Would be saviours must see through multifaceted lies, track down damning evidence and uncover an artefact of daemonic origins if they are to overthrow an immortal enemy who would see them slaughtered at every turn.
What evil taints the Jewel of the Empire? Will your group of beleagured heroes stop the forces of Chaos before it's too late? Step onto the Paths of the Damned to discover your fate!"