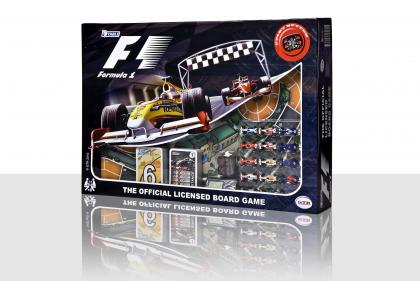 You are an official F1 driver: choose your team among Ferrari, McLaren, Red Bull, Mercedes and all the others and start with the qualifications! Decide your strategy, 1 or 2 pit stops or no one? Upon this, your tyres’ management is vital. Once the red lights turn off, insert the 1st gear and gradually speed up...you will feel like really driving! Pay attention to the curves: if you are driving too fast you could take the longer path or even go out of the track! But if you are good, you will enter the following straight at the best speed! Overtakes, accidents, tires’ wear, booster, engine damages and rain will add a touch of enchantment to all races.

Formula 1 IS A GAME FOR FAMILIES but SINCE no cards or dice move your car IS ALSO an interesting and appealing GAME FOR GAMERS.

HOW TO PLAY: cars are not moved by any die but according to the gear in that turn. The gear level is a pawn that can be moved on the own cars' card of one unit any turn, so the drivers can accelerate or slow down engaging a higher or lower gear every turn.
The curves must be faced according to an optimal speed value shown on a sign. If the cars enter the curve with speed higher of 1 or 2 gears than the optimal one they will be forced to drive the entire curve on the outer lane or in the worst case to go out of the track and restart in the 1st gear.
The cars' movement can be powered by playing the tyres cards: at the beginning of the race any driver receives 6 tyres cards (35% of value 1, 48% of value 2 and 17% of value 3). These cards increase the cars' speed (not the gear) and playing them means to have a tyres' wear: the drivers can decide for 0, 1 or 2 pit stops during the 3 laps of the race, depending how they are spending the tyres cards. Actually in the pit stop the drivers will receive other 6 new tyres cards.
The booster can give a +2 movement by rolling two 6-sided dice but with the risk of damaging the highest gear compromising the race. Slipstreaming, engagement and weather conditions (with rain and slick tyres) complete a real simulative and easy to learn game.