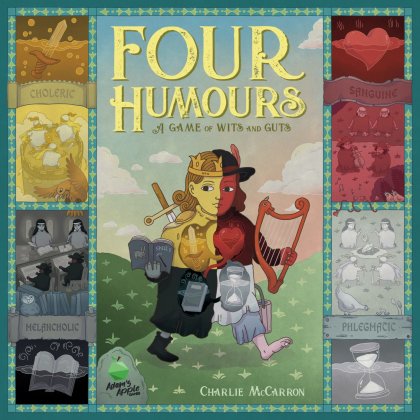 In Four Humours, you are a pharmacist in medieval times, and everyone knows that your personality is determined by an imbalance of your bodily fluids, a.k.a., the four humours:&#10;&#10;&#10; Choleric (Yellow bile) - Goal-oriented, decisive, ambitious.&#10; Sanguine (Red blood) - Talkative, enthusiastic, social.&#10; Melancholic (Black bile) - Analytical, detail-oriented, reserved.&#10; Phlegmatic (White phlegm) - Relaxed, peaceful, easy-going.&#10;&#10;&#10;The kingdom &mdash; composed of six map tiles with various locations &mdash; is filled with all types of personalities, from choleric sorcerers to phlegmatic peasants. &#226;&#128;&#139;Prove you're the best medieval pharmacist by influencing citizens throughout the kingdom so they can live out their life's ambitions...or lack thereof.&#10;&#10;Each turn, you play a color-coded humour token from your hand onto a character on a scene card to influence one of that character's four humours. (Alternatively, play a token onto your personal Midday or Midnight Parties board.) Each character can have one of two humour types played onto it, and you play each token face down so you know the humour of the character, but none of the other players do. Once all characters on two of the four scene cards are covered with humour tokens, all humour tokens are resolved in the following order:&#10;&#10;&#10; A lone choleric token wins, whereas two or more are discarded, after which...&#10; Two or more sanguine tokens win, whereas a single one is discarded, after which...&#10; Exactly two melancholic win, whereas more than two are discarded and a single one withdraws, after which...&#10; Any number of phlegmatic tokens win.&#10;&#10;&#10;Place each winning token on the location in the kingdom that corresponds to that scene. If a melancholic token withdrew, place that token on an adjacent location connected by a path or bridge. After all tokens have been placed, see whether you've completed any of the four randomized goals on display, such as having a token on each of the six map tiles or occupying two pairs of locations that are connected by bridges. Then reveal four new scene cards and begin another round.&#10;&#10;The first time that any player achieves a goal, you all reveal the tokens on the Band Wagon space of your Midday board, resolving the hierarchy of humours for the Band Wagon location, then you do the same for tokens on the Round Table Midday space. The first time any player achieves a second goal, you then resolve the four spaces of the Midnight Parties board, which might help you or others complete more goals. The game ends at this point, and whoever has completed the most goals wins, with &quot;most tokens in the kingdom&quot; being the tiebreaker.&#10;&#10;Alternatively, instead of using a shared kingdom board, you can play in &quot;Fiefdom Mode&quot;, with each player having their own fief board. Now when you would place a token, you cover a matching character in your fief instead of placing the token on a specific location. The goals now encourage you to cover all characters of certain types or to create a specific pattern of tokens. The Midday and Midnight Parties boards still work the same way.&#10;&#10;