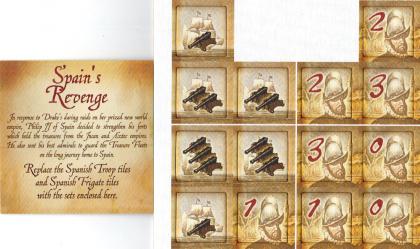 In the game Francis Drake, the players are in the Elizabethan era in the attempting to emulate the legend of Sir Francis Drake, hero to the English but a pirate to the Spanish. After the set up, each player must chart a course toward the riches of the Aztec and Incan Empires and complete 3 missions.

Spain's Revenge is an Expansion set of tiles to replace the Spanish Troops and the Spanish Frigates to give more strength to the forts and the best admirals to guard the treasure fleet on the course toward the Spain.