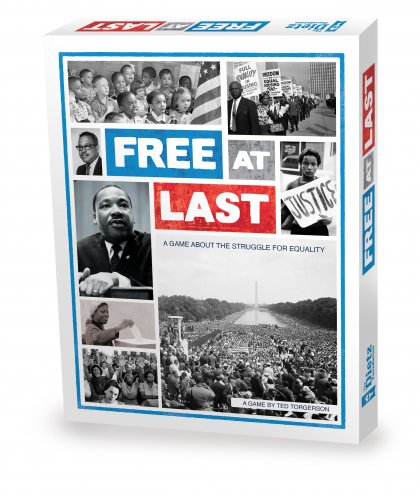 Free at Last is a game for 2-6 players. Players take on the role of civil rights organizations (SNCC, CORE, etc) as they fight for equal rights and the end of segregation in the Deep South, circa 1960-1964. It is not about Washington, DC, but the efforts of the people on the spot, whether that is Claiborne Parish, Louisiana or Mobile, Alabama.&#10;&#10;Free at Last is a card-driven game in which each card has a number (used to activate special individuals) and an event, but uniquely, the color of the number also matters and affects the type of project (voting rights, accommodations, school desegregation) that can be attempted.&#10;&#10;Multiple-length versions can be played: 3 turns (ending with the Freedom Rides), 6 turns (ending with the March on Washington), or a 9 turn game covering this entire period in American history.&#10;&#10;Note: This game bears the same name and designer as Free at Last, but the designs each stand on their own, with this game being for 2-6 players while the previous game was for only two players.&#10;&#10;