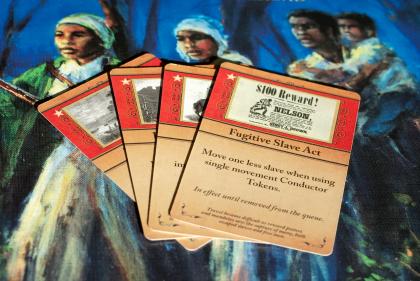 Freedom: The Underground Railroad is a card-driven, cooperative game in which players work for the abolitionist movement to help bring an end to slavery in the United States. The players use a combination of cards, which feature figures and events spanning from Early Independence until the Civil War, along with action tokens and the benefits of their role to impact the game.

Freedom: The Underground Railroad - Opposition Cards is a mini-expansion that represents enacted laws and regulations that helped the slavery States and were blows against the Abolitionist Movement. These include the Fugitive Slave Act, U.S. Marshals and more. Each card hinders the Abolitionist movement.