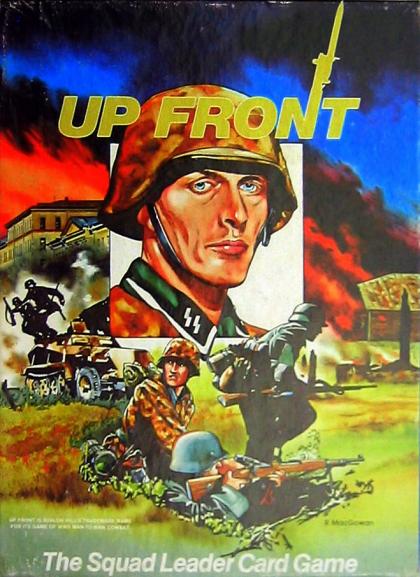 A card game that is loosely based on Avalon Hill's Squad Leader series. Each player directs a squad of men in various scenarios with cards driving the action.

"UP FRONT is a game of man-to-man infantry combat set in WWII Europe loosely based on the Squad Leader game system. UP FRONT is a far simpler adaptation of Squad Leader principles designed to a card game format. Yet, in many ways is more realistic than its predecessor in that its inherent mechanics simulate the fear and confusion of the battlefield and the inability of leadership to assert itself far better than any tactical game yet published.

There is no playing board; it has been replaced by Terrain cards which become the "hexagons" of the game as players maneuver their forces via Action Cards over constantly changing terrain. The scale of the game is measured in terms of relative ranges between opposing forces, with most combat occurring within a scale distance of 500 meters during the course of player turns measured in varying seconds of actual time."

Voti e commenti per Up Front