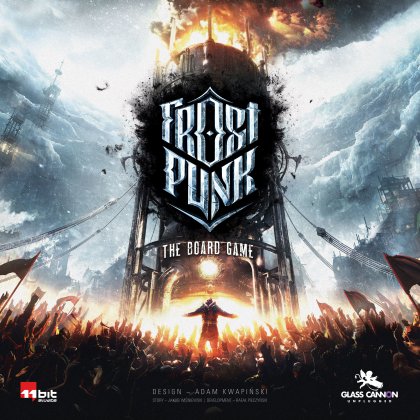 Frostpunk: The Board Game

In Frostpunk: The Board Game, up to four players will take on the role of leaders of a small colony of survivors in a post-apocalyptic world that was hit by a severe ice age. Their duty is to effectively manage both its infrastructure and citizens. The core gameplay will be brutal, challenging, and complex, but easy to learn. The citizens won&rsquo;t just be speechless pieces on the board. Society members will issue demands and react accordingly to the current mood, so every decision and action bears consequences.&#10;&#10;The players will decide the fate of their people. Will you treat them like another resource? Are you going to be an inspiring builder, a fearless explorer, or a bright scientist? Is your rule going to be a sting of tyranny or an era of law and equality?&#10;&#10;The game is based on a bestseller video game by 11bit studios, the creators of This War Of Mine. The original (digital) edition of Frostpunk is a highly successful strategy-survival-city-builder, a BAFTA-nominee that originally launched in 2018.&#10;&#10;&mdash;description from the publisher&#10;&#10;