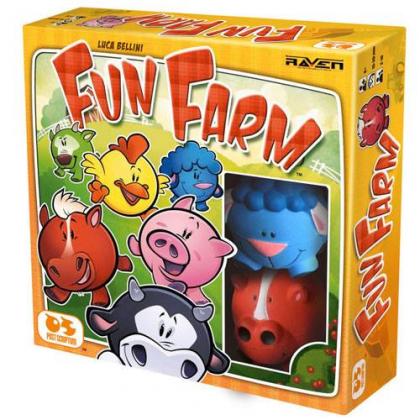 The animals have escaped from the farm! You need to bring them back before they get into trouble – and you want to do so faster than your opponents so that you can save more than they can!

In the fast-catching game Fun Farm, players compete to spot and catch the animal shown on the cards before all their opponents. Each round, the active player reveals the top card from the deck, placing it next to any others still on the table. Each card depicts an animal, a black die (showing one color on this die), and a white die (showing one color on this die). The player then rolls the black die and the white die. If a die depicted on a card matches the color rolled on that die, players race to grab the animal toy from the table that matches the animal depicted on the card. Whoever does so first claims the card, and once the deck runs out, whoever has the most cards wins!