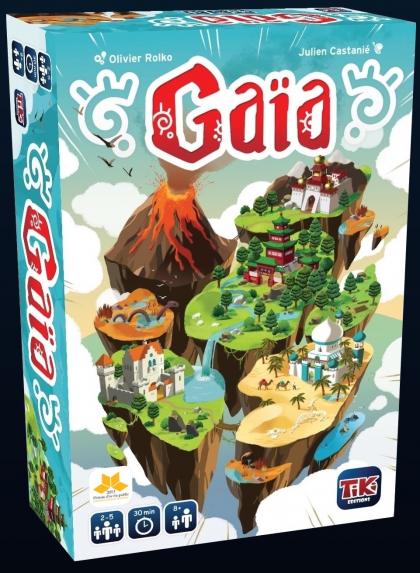 Gaïa is a 2-5 player game in which you create a world, instill life in it, build cities, try to satisfy their needs, and use godly powers to shape the world to your benefit.

In game terms, Gaïa involves tile placement, area control and influence with a twist of power cards. Each player has five wooden figures, and if you're the first to place all five of your figures on the board, you win!

Gaïa includes two levels of rules, with the basic rules allowing for play with those as young as eight thanks to the game's simple mechanisms and non-attacking nature. The advanced rules give you the opportunity to use godly powers — lightning, volcanoes, rain, sun, earthquakes, etc. — to shape the world after it has been created. You can even steal an opponent's cities, making it a more aggressive game with a higher level of strategy.