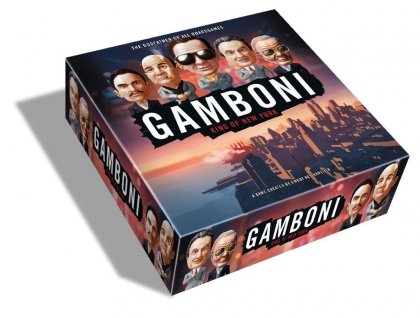 Strategy board game for 3-5 players where social skills are as important as tactics and luck.&#10;&#10;New York City, April 12th 1985 - Salvatore &ldquo;Big Sal&rdquo; Masserano, head of the DiNero crime family and &ldquo;Boss of all Bosses&rdquo; was shot dead in broad daylight. After two decades of peace and prosperity, the city holds it&rsquo;s breath on the verge of an all out WAR. Now it is time to restore order and take what is yours ...&#10;&#10;Take control of one of the Five Families in a quest to become Boss of all Bosses.&#10;&#10;Players take turns to complete 3 phases:&#10;&#10;1. MONEY&#10;Money is collected at the start of each turn. The bank pays out cash from business sites and when a player advances in rank, he receives some cash from other players as well. Now take a Commission card or an FBI card from the pile in the middle of the board and continue to the POWER (or: action) phase of the game.&#10;&#10;2.POWER&#10;Each turn players can move their pawn up to 5 spaces. As you move around the board, territory is claimed by placing chips on empty spaces. If a space is already claimed by another player, it can be conquered using the weapon cards. Win the battle and replace the opponents token with your own. One can attack using the weapon cards on hand, and / or visit a GANG on the board and pay them to carry out an attack.&#10;&#10;3. RESPECT&#10;At the end of each turn, players can buy cards. This can be business site cards, weapon cards or both. There are 3 types of business, 4 of each type. The more sites you own from one type, the more you earn per site. Business sites are bought from the bank, weapon cards from other players. All weapon cards are sold from the same main stack. Deposit cash for points and finish your turn by moving the tracker chip tot he next player.&#10;&#10;HOW TO WIN&#10;&#10;There are 3 ways to win the game:&#10;&#10;1. POINTS The 1st player to reach the top on the score ladder, wins. &#10;2. MISSION The 1st player to defeat an assigned opponent, wins. &#10;3. AREA The 1st player to have placed all 30 area chips on the board, wins.&#10;&#10;Key to winning GAMBONI is to find the right balance between RISK and REWARD. The game involves tactics, strategy, diplomacy, bluffing, risk taking as well as a portion of luck. One must be agressive and active but know when to stop and whom to attack and whom to keep as a friend ...&#10;&#10;The early bird might catch a worm but the second mouse gets the cheese!&#10;&#10;Each Family has their own special ability, suiting different strategies and personalities (image above, from left to right);&#10;&#10;DiNero (GREEN): Starts with 3 bulletproof vest cards. Special ability: HAND SIZE +2 - Most suitable for defensive players who like to build up before going to war.&#10;Luchetti (WHITE): Starts with 3 consigliere cards. Special ability: BAIL LEVEL -2 - Most suitable for balanced players who don't mind some backstabbing and betrayal.&#10;Montano (RED): Starts with 3 minigun weapon cards. Special ability: WEAPON BUY +2 - Most suitable for aggressive players who like action and don't like waiting.&#10;Borghese (BLUE): Starts with $ 15,000 extra. special ability: DEPOSIT $40k - Most suitable for balanced players who enjoy building businesses and gain power via money. &#10;Garrone (BLACK): Starts with 3 getaway car cards. Special ability: MOVEMENT +2 - Most suitable for players who like to play aggessively and enjoy provoking their enemies.&#10;&#10;