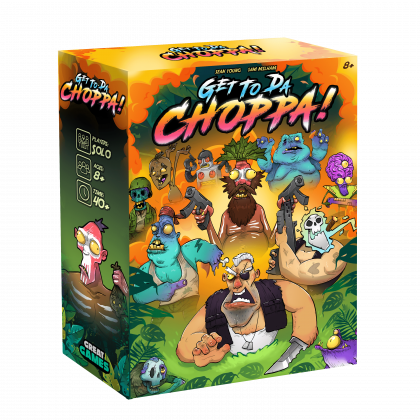 Get to da Choppa!

The Story so Far&hellip;&#10; &#10; Your squad of Special Ops soldiers has been sent on a Top Secret mission to a remote part of South America. Before you can reach your Landing Zone, your chopper crashes, many kilometers away from your destination. Salvaging what you can from the wreckage, armed with a GPS uplink, your wits and weapons, you must fight your way through an unknown and hostile jungle. Your only possibility for survival: &#10;Get to da Choppa!&#10;&#10;About the Game-&#10; &#10;Get to da Choppa! is a solo dice game that&rsquo;s free to print and play.&#10;&#10;Your goal is to get your Squad through several areas (called Zones) of the wild jungles of South America. However, this area of the jungle has fallen victim to a number of hostile forces. Drug Lords, UFOs, invisible alien hunters, Nazis, zombies, headhunters, dinosaurs; any jungle action movie trope you can think of you&rsquo;ll have to face and try to survive. You will need to balance moving, stealth, foraging for supplies and combat to survive. The only way to win is to Get to da Choppa before your squad is wiped out.&#10;&#10;Each turn, you roll nine dice and can re-roll and keep any dice you like up three total rolls. You place the dice on your Squad sheet to follow the turn's order and show how many dice you have placed to a certain activity that turn. Here&rsquo;s a breakdown of where all the dice rolled are placed, and what they mean. &#10;&#10; Enemy Contact- Your Squad encounters an obstacle or enemy that needs to be dealt with.&#10; Salvage- Some of your Squad forages for supplies and ammo.&#10; March- Your Squad moves along your path towards the next Check Point.&#10; Stealth- Your Squad attempts to move slowly and avoid detection from an Enemy Contact.&#10; Engage- Your Squad readies for combat! Lock and Load!&#10; Command- Can be used as an additional die during each of the Salvage, March, Stealth and Combat phases. They can also be used to re-roll any single die on the Salvage, Combat, Injury, Recovery or Supply Shortage tables.&#10;&#10;&#10;The drama of the story unfolds by balancing the lives of your squad with the risks and combat you are willing to get into, as well as ensuring enough resources. Each turn brings you closer to the next checkpoint, where you will need to rest, restock, and heal up. The game ends by reaching the fourth Zone's Checkpoint where the extraction Chopper is waiting to take what's left of your squad back to safety. Victory conditions are calculated by a simple number of Squad members survived, or a slightly more involved scoring system.&#10;&#10;&mdash;description from the designer&#10;&#10;Results of the 2020 Solo PnP Design Contest for Get to da Choppa!&#10;&#10;Best Overall Game: 19th&#10;Best Easy to Build Game: 9th&#10;Best Original Artwork: 10th&#10;Best Game Designed in Contest Timeframe: 5th &#10;Best New Solitaire Designer: 8th&#10;Best Push Your Luck/Survival: 3rd&#10;&#10;