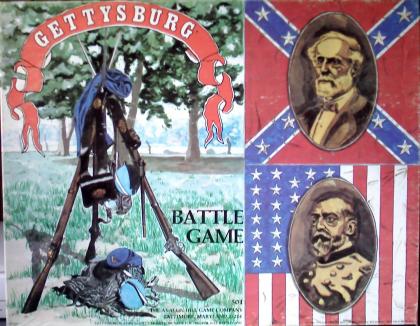 The original version of this game was the first historical wargame on the market. Revised several times in the 60s, this, the 77 version is the ultimate game on the Battle of Gettysburg.

The basic game is in the 'Classic' tradition; simple, quick, and furious. Each side has about 25 counters on the board.

The intermediate game is a large step up in complexity. Each player has 60 to 80 counters in play. Added game features include terrain effects, strategic movement, voluntary retreats, a more sophisticated combat system, disorganization. command control, breastworks, and artillery fire.