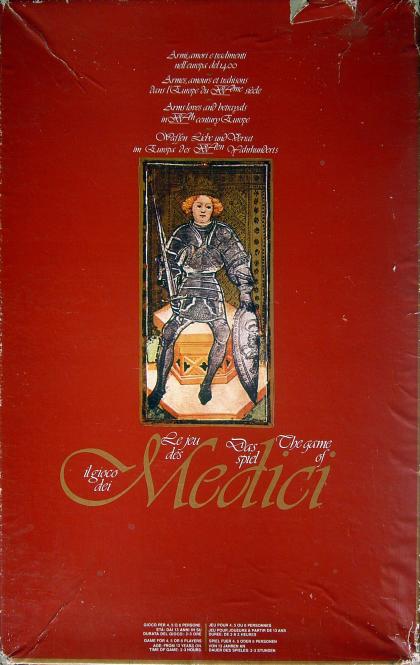 Players represent the powers of the XVth century: Holy Roman Emperor, Ottoman Turk Sultan, Pope, King of Spain, King of France and the head of the famous Medici family of Florence. The board is hexagonal with each player having a path by which his pawns can visit his direct left and right neighbors. In addition, each side has a direct path to the center of the board. Players other than the direct neighbors could only be reached by traveling through the neighbors or the center.&#10;&#10;Included in the game are 6 domestic army pawns for each player, 36 mercenary pawns, 12 ambassador cards, 6 lady cards, 50 coins and 2 dice. At the beginning, each player receives the 6 domestic army pawns, 1 lady, 2 ambassadors and 3 coins.&#10;&#10;Combats are resolved without random chance by simple calculation of the difference between the number of pawns. &#10;Income is provided to the player on the basis of the number of spaces occupied by a single domestic pawn. Each player may offer alliance to any player and if accepted, ambassadors are exchanged. Alliance permits joint attacks and unlike some other games, alliances are law: allies absolutely cannot attack one another.&#10;&#10;