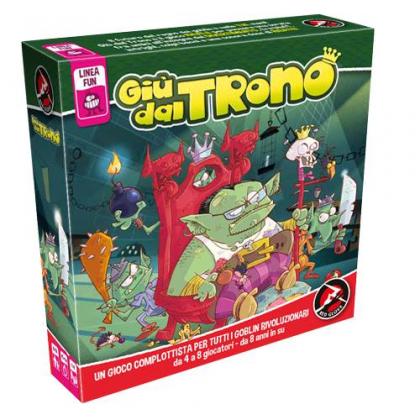 "...this must be end!" screamed Skram with his squeaky voice, amplified by the crude loudhailer.
"The King!! The King is a tyrant, and exploits us and our work, keeping all the gold for himself!" shouted the little goblin. "We will regain our freedom!"
"Hurrah for the revolution!" screamed the crowd.

Spronfz said: "Why a mace? Why not a sword?"
"Or maybe an axe", rectified Glurz.
"Or a bomb!" shouted Fnurk.

Skram sighed, as the meeting turned into a giant-sized goblin brawl.

Giù dal Trono is a game of bluff and intrigue, but in a "goblin-style": players play in secret teams, trying to guess the faction of other goblins, each time wants to kill the king with a different weapon, and during each turn a player will choose a room of a dungeon, asking the other players to forge weapons with him, in order to produce enough maces or axes to supply with arms the plotters.
During each turn, player will also play cards to unveil factions, or to hinder or rob the opponents, simulating the not-so-complex discussion system in goblin society.

A player can lead his team to victory killing the king, or try to win alone fulfilling the requirements of his secret objective.