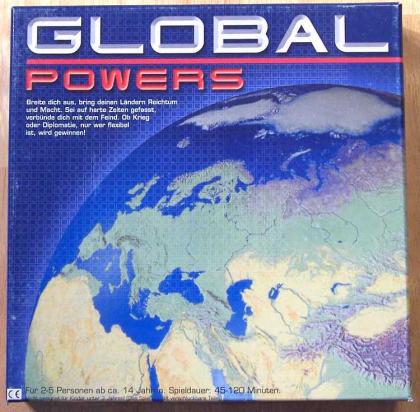 In May, the game was still presented as ‘Divide et Impera’. After much playtesting and more changes, the game has been renamed as Global Powers (2-5 players 14 and up). The object of the game is to exert the most influence over the world, which in this game consists of 12 regions.

“It’s a not-quite-politically-correct game with tactics, AGITATION and plenty of interaction” says publishing head Peter Eggert. “In order to obtain the necessary influence, players can use military, political or financial force. The player who has the most playing figures (politicians) in a given region determines which actions may be carried out there. The more politicians, the more actions. These range from waging war through sabotage, smuggling, scandal and defection to unrest and even a Putsch. Each action can be countered either by a veto or by being voted down. UN resolutions (administered by the players) can also influence the gameplay.”