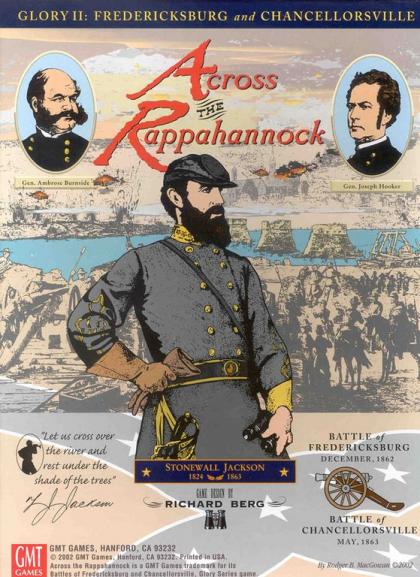 Glory II: Across the Rappahannock

Glory II: Across the Rappahannock (AtR) is the second game in GMT's acclaimed American Civil War series, Glory. Glory presents a brigade-level system that highlights ease and speed of play with solid historical insight. Across the Rappahannock revises the original design to make all of those features even better. And it is still a game that can be played, and played well, by solitaire gamers.

Across the Rappahannock still features GMT's unique chit activation mechanic, which provides a great deal of play tension, as the commanders never quite know what is going to happen next. However, new command and combat mechanics make the game even more fun. Best of all, these new mechanics are not only retro-fitted to the original Glory, but Glory II: AtR provides all the counters necessary to play the battles in the original Glory game (Manassas and Chickamauga) with the new rules!

Across the Rappahannock brings you two of the biggest battles in the Civil War; battles that have received scant attention from the hobby: Fredericksburg, with Burnside's frontal assault across the river against a heavily defended Confederate position, and Chancellorsville, the biggest battle in the entire war. And, while the full game of the latter battle uses 3 maps and a lot of your time, there are two standard one-map battles and three smaller scenarios highlighting engagements within the bigger battles that use few counters and take only a couple of hours to play!