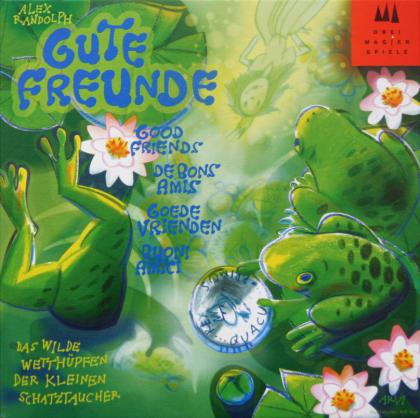 Frogs jump after silver and gold. On a sunny clearing in a dark forest is a small pond, on which beautiful sea-roses float. Each player transforms into a frog and jumps after gold and silver coins, which are on the bottom of the pond. Whichever frog can out-jump and collect the most coins wins. This game comes with no board. Instead 12 small wooden plates are present, on which sea-roses are shown. These are now set up in such a way that each frog can jump easily from sea-rose to sea-rose.

The length of the frog’s jump is decided through cubes and then when one is finished jumping one picks from a material bag that also contains worthless black stones in addition to the gold and silver.

In order to prevent the first frog from jumping all of the sea-roses the first frog placed may do only one jump, the second placed may do two, the third, three and the fourth four. Play remains exciting during the entire operational sequence. If one lands on the same rose as another frog one shakes and calls themselves "good friends". A successful high-quality children's game, which captivates with beautiful, attractive wood characters