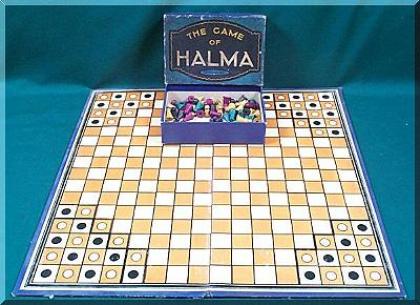 Halma (from the Greek word meaning "jump") is a board game invented in 1883 or 1884 by an American plastic surgeon at Harvard Medical School, George Howard Monks. An English game called Hoppity was the inspiration.

Playing equipment consists of a checkered board, divided into 16 x 16 squares. Pieces are typically black and white for two-player games, and of various colours or other distinction in games of four players. In the Royal Series edition the playing pieces are pink and yellow (not supplied with the game). It is also a two player variant only.

From a rulebook introduction:

"The game of Halma is played with a number of men on a board with 256 squares. Two or four persons can play the game, or it may be played by one person as a solitaire.

In each corner of the board there are thirteen squares, called a yard, inclosed (sic) by dotted red lines. These yards are used when four persons play. In two of the four corners of the board a heavy red line..."