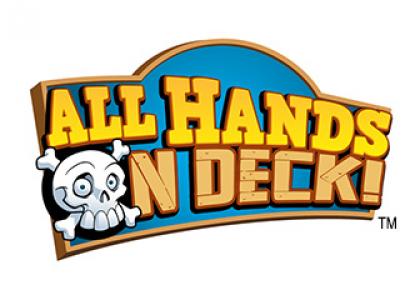 All Hands on Deck!

A Card Game of Pirate Crewbuilding.

Players take on the role of Pirate Captains who have returned from their latest campaign on the high seas looking to replenish their supplies, make repairs to their ship and take on new crew members. They visit a bustling pirate tavern to seek out able bodied sailors to join their crew and fill their ragged ranks. But Avast! Other Captains who survived the battle have made port as well and are also looking to hire on crewmembers of their own. Players must bid on sailors looking to sign to a new ship, carefully build out their crew, undermine the efforts of their fellow Captains, and avoid getting plundered themselves as they attempt to get their ship manned and ready to set sail.

'All Hands on Deck!' is card game centered around an auction/trick taking mechanic. Players blind bid to attempt to win sailors that are turned over on the top of the deck, using the numbered value of different cards they already have in their hand as bidding capital. There are ten different pirate ranks in each of three 'suits' that represent pirates from three crews that returned to port without their Captain. Players leverage the cards in their hand they don't need to try and win cards at auction that will help them build a winning hand. They must be careful, however, as other players will use the many different action cards in the deck to try to influence the bidding process to their own ends, offering rum bribes, drowning available pirates, or even luring them to their demise with the deadly song of a mermaid! The first player to build a winning pirate crew shouts 'ALL HANDS ON DECK!' and proves themselves the craftiest Captain in these waters.

The game contains 108 cards, a Rulebook, and loads of pirate attitude.