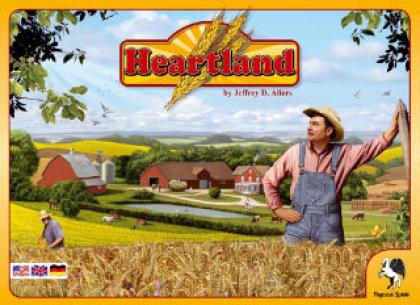 West of the Mississippi, the grasslands of Middle America contain some of the richest farm land in the world, producing corn, soybeans, wheat, hay, and livestock. Purchased from France as part of the Louisiana Territory in 1803, the region was divided into square mile plots for the settlers from the east. In this game, players take the role of these settlers, developing the plots of land and establishing farms in America’s “Heartland.”

The game, entitled “Eine Frage der Ähre” in German, is a three-dimensional tile-laying game. Each tile contains two types of crops to be planted as well as a certain number of “barnyard points.” When placing tiles, players must always choose between scoring immediate “harvest” (victory) points or developing their farms through the barnyard points, which will provide victory points over the longer term. In addition, there is a race to the top of each barnyard point track in order to acquire the most valuable animals for the farm. Players may also “rotate crops” by using their tiles to cover up fields that bring their opponent’s points, possibly expanding their own farms in the process. This translates into an hour-long game aimed at families and gamers with multiple paths to victory.
Source: Jeffrey D. Allers