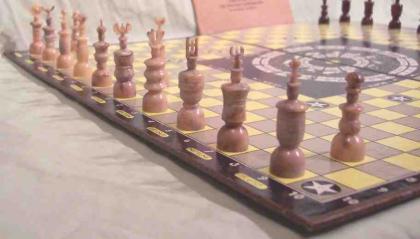 Helios (subtitled "The Game of the Gods") is a chess-like game loosely inspired by classical mythology.

The pieces have movement powers reminiscent of those of chess pieces, but with some differences: several pieces have more than one way to move, one mode of movement - N squares at a time in any direction, repeated 3 times - is not found in standard chess, and generally speaking pieces are limited to moving a number of spaces equal to their relative position from the Sun plus 1 (e.g., the Earth piece can move 4 squares at a time).

The board is a 20x20 grid with a block of 40 unplayable spaces in the center. There are special starred spaces on the board which are used by the pieces with weaker standard movement (Mercury and Helios) to teleport around the board.

Pieces are captured by landing on them. The object is to put the opponent's Helios in checkmate (or "total eclipse").

In addition to the rules themselves, the rulebook includes information on the gods and planets represented by the pieces.